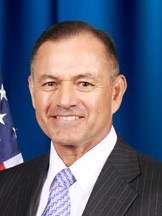 General Aguilar retired from the United States Marine Corps January 1, 2002. His last duty assignment was as the Deputy Commander Marine Forces South and Commanding General Fleet Marine Forces South. During this tour he served as the Commanding General Joint Task Force Panama providing anti-terrorism and force protection during the final transfer of property and facilities of the Panama Canal to the government of Panama.
Brigadier General Aguilar was born May 10, 1950 in Los Angeles California. He was commissioned a Second Lieutenant July 15, 1971 and designated a Naval Aviator November 3, 1972.
During his 31-year Marine Corps career he held a variety of flying and command billets, accumulating over 4000 hours in both fixed winged and helicopters, primarily as an Attack Helicopter Pilot.
In addition to commanding a helicopter squadron and air group he was also the Director of the West Coast Drill Instructor School, the only aviator to ever hold the billet. Staff assignments include Senior Military Assistant to the Under Secretary of Defense for Policy and Deputy Director for Operations, the National Military Command Center, the Joint Staff.
Brigadier General Aguilar is a graduate of National University and the Naval War College and holds a master’s degree in Strategic Studies and National Security Affairs. He is a veteran of the Gulf War. His personal decorations include the Defense Superior Service Medal, the Legion of Merit, the Bronze Star, the Meritorious Service Medal and the Navy and Marine Corps Commendation Medal. He has the added distinction of being the first person of Mexican descent to reach the rank of General Officer in the United States Marine Corps.
Brigadier General Aguilar was previously the Federal Security Director for San Diego International Airport, one of the first eight FSDs to be selected by the newly created Transportation Security Administration. He has held this position from 2002 through 2012 when he retired. Early into his career he was temporarily assigned to support the Coalition Provisional Authority for the Ministry of Transportation and Communications Iraq. He assisted with the plans and efforts to return civil aviation operations to Iraq. During hurricane Katrina he was detailed to Washington DC to coordinate TSA’s evacuation and recovery operations. In 2006 he was selected as the Federal Security Director of the Year for the Western Area and in 2011, TSA’s Federal Security Director of the Year. Prior to his retirement he completed a five-month Headquarters’ tour where he led the efforts to create the TSA Academy.
From 2012 through 2018 he has provided consulting services to defense contractors and security service firms. In 2018 he assumed the position as Executive Director for the Flying Leathernecks Aviation Historical Foundation and in 2021 the additional responsibilities as the President/CEO of the newly created Flying Leatherneck Aviation Museum.

Ep. 10 Inspiring the Next Generation Through the Flying Leatherneck A…